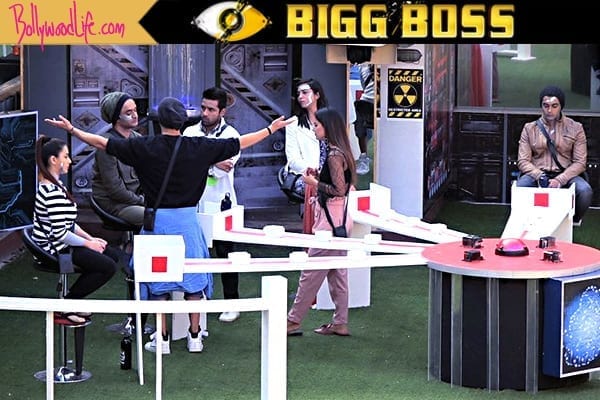 Tonight’s episode of Bigg Boss 11 begins with the contestants waking up to the song, Emotional Atyachaar from the film, Dev D. Akash Dadlani points out to everyone that Shilpa Shinde always has to say something when it comes to Vikas Gupta’s arguments with others. Shilpa reminds him that he told them last night that he wants to set a good example in front of the nation, and he not doing a good job by using this language. Vikas and Akash are still discussing about what the former said during the first leg of the ongoing luxury budget task. Akash tells him that he lost all the respect that he earned. Vikas tells him that he still likes him and hugs him. They again get into an argument, and Puneesh Sharma tells that Akash will burn Vikas’ effigy once he comes out of the house. Vikas walks out and tells him that he is not fighting with him because he is “ladies”. Akash makes fun of Vikas’ medical problems.

Hiten tejwani and Priyank Sharma are in the washroom area as Hina is taking a shower in the bathroom. They laugh outside and make fun of her. Priyank later comes to the  camera and tells that whatever he will say during the task is a mix of truth and lies and it’s for entertainment only.

The second leg of the task begins and Vikas, Luv, Arshi and Shilpa are the robots. The first emotion is anger. Hina targets Vikas and tells not only her, but whaetevr everyone is doing inside the house is for the cameras. Priyank also tells him that he shouldn’t teach him the meaning of friendship. He says that Vikas’s brother is his brother too and his mother is his mother too, but he has realised that they both are different than her. He exposes that it was Benafsha Soonawalla came up to him and Vikas suggested to her to start a love triangle with Priyank.

They both go upto Luv and Priyank tells him that he shouldn’t have felt bad when Priyank abused him, because they discuss abuses in general. He makes fun of Luv’s dancing skills.

To Arshi, they call Akash and Priyank orders him to perform some tasks like just standing, sleeping, going in the pool, thereby making fun of Arshi how she follows Vikas’ orders all the time. Hina tells Vikas that his friend, Karan Patel, who entered the house for a brief period of time told Hina that she gave reaction twice. She tells him that was two times just in two and a half months. She challenges him to stay in the house for 24 hours.

Priyank later reveals to Hina that the Benafsha bit he said to Vikas was not true. Hina asks him why did he do that, and he said just for the game.

The next emotion is crying. Priyank tells Vikas that he is the one, who advised him and made him his family. Although Vikas rejected him initially, but it’s because of him he is here.

Priyank wears a bikini and Hiten dresses up as a woman as they know that the next emotion is ‘laughter’. First up is Akash, who tries to make them laugh by squeezing the oranges that he had kept on his chest, but fails as they find it disgusting. Hiten and Priyank too tries to make them laugh, but they fail too as all of them do not react and mask their emotions. As the alarm rings, Vikas goes up to Hiten and tells him he was really good and that he is proud of him. Vikas, Arshi and Shilpa say that Akash crossed all the limits and he was very vulgar, and that Hina should have stopped him.

Hiten says this to Hina and tells her that they shouldn’t have sent Akash first. The next emotion is ‘anger’ again. Hiten tries to make them angry, but fails. Hina goes up to Luv and asks him why does he get angry on small things.

The task comes to an end. Puneesh, who is the sanchalak of the task is asked to tell the scores. He announces that Luv, Vikas, Arshi and Shilpa have won the task. Luv tells Hina that Priyank went a bit overboard by calling him zero during the task. Hina makes him understand and tells him to be a bigger person.

Hiten tells Akash that by squeezing the oranges, he made it disgusting. But he tells him that whatever he did, he got an approval from his team members. Deepika Padukone and Irrfan Khan will be coming together for … Finally it’s official! The Qubool Hai pair will now be …