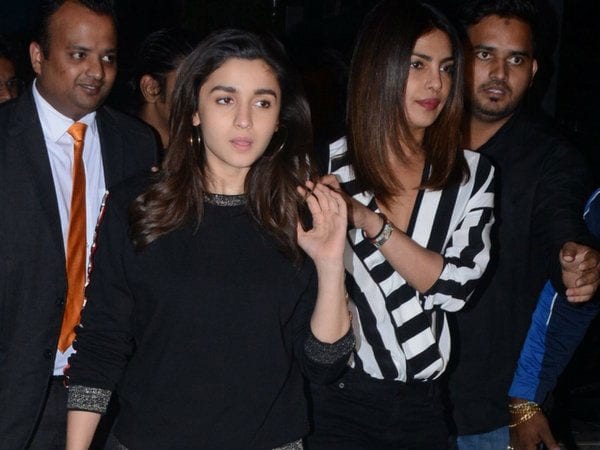 Priyanka Chopra, who started her production house Purple Pebble Pictures in 2015, has apparently approached first Bollywood actress with a project and she’s none other than Alia Bhatt.

Reportedly, storyline of the film, revolves around the stray dogs and PeeCee is quite keen to rope in Alia in the same. Interestingly, the duo was recently seen catching up over a dinner.

AWW! Aaradhya Gets GOOFY With Big B; Celebrates New Year With Navya Naveli

A source told DNA, “Speculations were rife that the duo met to discuss a film where they will be seen together, but actually Priyanka bounced off the idea of her project to Alia. The latter has liked the story but is yet to give her nod.”

“Alia and Priyanka are extremely fond of each other. Plus this is a story that Alia herself pledges her support to. But the only problem is her dates. Alia already has her date diary full with Zoya Akhtar’s Gully Boy, Abhishek Varman’s next, Ayan Mukerji’s Brahmastra, along with the release of Meghna Gulzar’s Raazi,” added the source.

Now the question is whether Alia will be able to go ahead with this offer of PeeCee despite of her tight schedule? We gotta wait & watch.

On the work front, Alia Bhatt will be next seen in Raazi, directed by Meghna Gulzar. The film also casts Vicky Kaushal in the lead role. Apart from Raazi, Alia will soon start prepping for Gully Boy, along with Ranveer Singh.

Well, it all starts off with an Instagram story by …

The much awaited guest of Anushka Sharma-Virat Kohli’s reception, PM …

Vicky Kaushal believes #MeToo movement is bringing an important and …

Lisa Ray is in the festive spirit and attended the …

Anyone, who keeps a constant tab on Bollywood knows about …