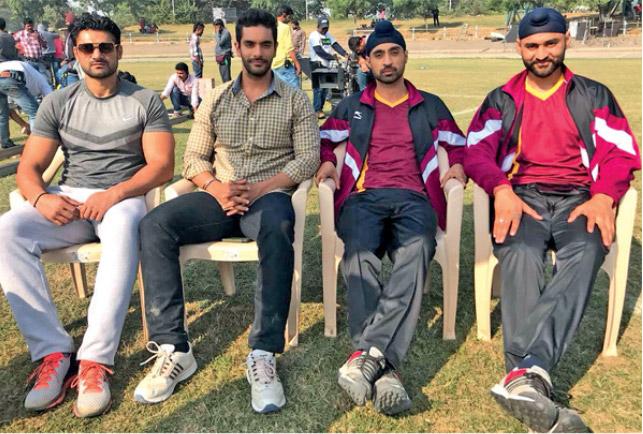 Actors Angad Bedi and Diljit Dosanjh are intensively working hard for their upcoming film, ‘Soorma’. ‘Soorma’ is a sports biographical movie, based on the life of former Indian National Hockey team captain, Sandeep Singh. The film’s shooting is in full swing and it is being helmed by director Shaad Ali. While Diljit will be seen portraying the role of Captain Sandeep Singh, Angad Bedi is playing the role of his elder brother cum mentor, Bikramjeet Singh. Bikramjeet and Sandeep themselves are training the two actors for the film. Sharing his experience working with the sportsmen, Angad told a leading daily, “When Diljit and I witnessed the brothers’ energies we instantly realised what zone we were supposed to get in. I have finished shooting for most of my portions barring a three-day rehab sequence which will be filmed at a later point.”

Talking about the legendary tale of the two sportsmen, Angad said, “Bikramjeet was the best drag flicker in the country, but because of his injuries he couldn’t go ahead. He spotted the talent in his younger brother and would do two-day jobs to feed his family as well as pay for Sandeep’s training.”

‘Soorma’ also stars Taapsee Pannu as the female lead and is scheduled to release on 29th June 2018.

After accepting movie like “Cheat India” and Netflix series that …

The music industry of Bollywood is floored by Rapper Badshah … We have seen many relationships blooming inside the Bigg Boss … Check out few inside pictures of the launch of Hema …