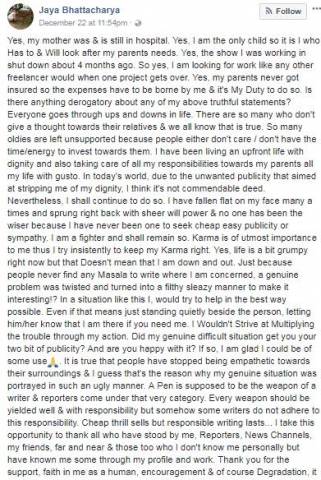 Just as some actors are known for their ‘publicity gimmicks’, a certain sect of the media is often accused for sensationalising news and practicing ‘yellow journalism’. It has become a common affair to blame journalists and term them to be irresponsible if a particular news article doesn’t sooth the senses of the actor or actress in question.

TellyChakkar was the first one to inform its readers that actress Jaya Bhattacharya’s mother is unwell and that she is going through a rough patch because of unexpected circumstances.

(Also Read: “All my finances are down the drain, I am badly in need of work.” – Jaya Bhattacharya)

As a promise to keep our readers updated about the latest happenings in the Television industry, our scribe rolled out an article which enabled Jaya to bring forth what she was perturbed about from within. In a heart to heart conversation with Jaya, she mentioned about the ordeal she has been facing off-late. This included her tussle with her mother’s ill health coupled with a dearth of good work.

As soon as this piece of news hit our website, some esteemed media publications twisted the content and re-wrote the story pauperizing Jaya. This did not end in a day or so, the media reports flared up to the extent of carrying headlines which projected Jaya stony broke and poverty-stricken.

The news went viral where the media chose to churn out their versions to a factual piece written by TellyChakkar. Jaya too rubbished rumours and clarified her stance on how the portals used her genuine problem for their two bits of publicity along with an elongated post on social media–

TellyChakkar takes complete responsibility for the article that has been published on our website and we vouch for the fact that we did not mean bad. As Jaya, News Priyanka Chopra and Nick Jonas to debut on Koffee … News Did not give screen test for Papa By Chance: … News Nitanshi Goel in &TV’s Daayan MUMBAI: TellyChakkar has been … News Naksh pleads with Naira to leave Kartik in Yeh … News Kabir to make a big sacrifice in Ishq Subhan … News What is the similarty between Roshesh aka Rajesh Kumar …