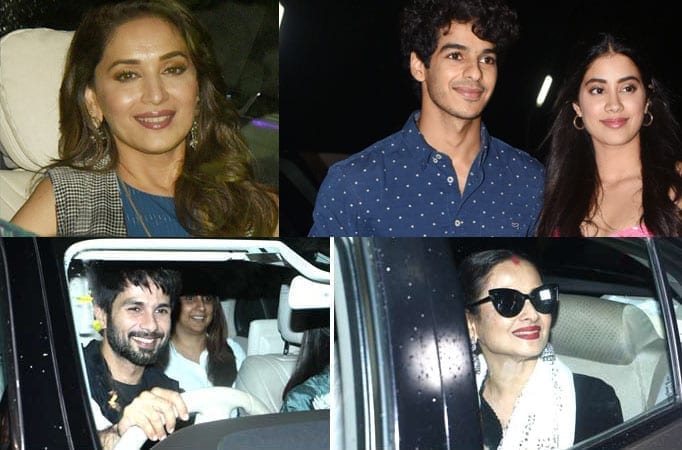 MUMBAI: Makers of Dhadak hosted a special screening of their film that was attended by a plethora of Bollywood celebrities.

Both lead actors Ishaan Khatter and Janhvi Kapoor had their families, along with all time divas Rekha and Madhuri Dixit in the audience.

Janhvi Kapoor, who makes her debut in Bollywood with this remake of the 2016 Marathi film Sairat had her father Boney Kapoor and sister Khushi Kapoor present.

Ishaan’s parents Neelima Azeem and Rajesh Khatter, his half brother actor Shahid Kapoor and his wife Mira Rajput, besides Kunal Kemmu and Soha Ali Khan, along with Malaika Arora, Karishma Kapoor, Neha Dhupia, Angad Bedi were present at the screening

Dhadak director Shashank Khaitan along with producer Karan Johar were also present along with the cast.

Produced by Dharma Productions and Zee Studios the film has created quite a buzz. News Many women are striving to be like Zara of … News Priyank is missing this person, Shaheer and Drashti to … News Congratulations: Ankita Lokhande is INSTA Queen of the Week! … News Guddan’s WARDROBE MALFUNCTION in Guddan, Nancy to DIE in …