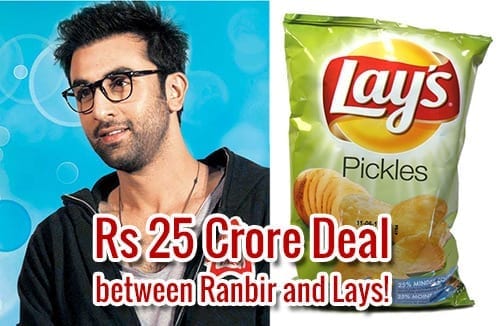 It is pricey to select a brand ambassador. Do celebrities earn more by workin in films or by endorcing brands is a matter of debate. Whatever may be the truth but it is a fact that Ranbir Kapoor has bagged a deal of Rs 25 Crore with a leading chips manufacturer company Lays. There are many celebrities in the industry who are endorcing a brand or two and marketing their products but it could be the first time that any celebrity is payed such a hefty sum for mere four days shoot.

The brand was in talks with few b-town celebrities to be their ambassadors. The del was almost finalised with one of the leading actor. However the deal was cancelled at the last moment due to some inevitable reasons. The company , hence started looking for some other celebrity and zeroed in on Ranbir.

Earlier Saif Ali Khan was the brand ambassador of the company. However it is clear that Saif will remain to be where he is and Ranbir will only join him in the task. Lays has a tradition of having two celebrities at a time as a brand ambassador.

Ranbir will be starting the shoot very soon and apart from the four days schedule he will have ot be available for appearances as per the company’s future requirements. There is no denying the fact that Urvashi Rautela is …