Home
Bollywood Celebrities
Priyank’s ‘So Called’ BFF Ben And His Ex-GF Divya Pose Together For A Selfie, Here’s The Picture! 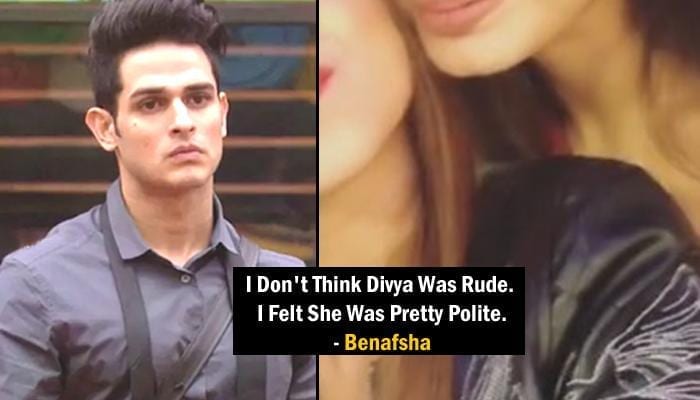 Amongst so many reality shows, one of the most talked about and probably we can say, the most controversial one is none other than Bigg Boss. This time it is the 11th season of the show and by far, this season is considered to be the most halla bol sorts. It started off with the biggest spat between do jaani dushman Shilpa Shinde and Vikas Gupta, who now seem to be friends with each other.

Recommended Read: Virat And Anushka’s Theme Based Mumbai Reception Invite Is As Unique As Their Wedding

As the show took off, several other controversies came into the forefront, for instance, Puneesh and Bandgi’s ‘love affair’, which many believed to be a strategy in order to survive in the house. And one amongst many hot topics has been of Splitsvilla fame Priyank Sharma and his love life.

Recently, the inmates’ family members were given a chance to enter the house and meet their respective contestants. So, for Priyank, it was Divya who came into the house only to break up with him, which he was unaware of. Prior to that she already parted ways with him and announced it to the world, but this time it was the one on one confession.

During all of this fiasco, it was also speculated that his closeness with Benafsha Soonawala (his good friend and co-contestant) made her break up with him. Nonetheless, refuting all these baseless rumours, Ben posted a lovely picture of them both posing for a selfie. Yes, she posted the pic on her Instagram story.

Do Checkout: Saif Shared A Funny Incident About Soha And Her Ex-Boyfriend In Front Of Her Husband Kunal

Everything seems to be pretty cool and fine between them, no? Also, earlier in an interview, Benafsha said this:

“Why do people think I am the only reason why Divya has broken up with Priyank. Once I came out, I spoke to Divya. We are not best friends but we spoke well. She told me, Ben, it’s not your fault. Divya’s main problem is that her name has not been mentioned by Priyank as she expected it to be. He has been mentioning other girls. She is like, why is my name not being taken. He is talking about this and that girl. Priyank’s statements are changing by the day. Honestly, I don’t know much about the relationship they share or shared. Last night, he told Hina (Khan) that they broke up before he went inside. I don’t think Divya was rude. I felt she was pretty polite. Yes, she was hurt. Perhaps it was not the occasion to break up. I feel it was a little too early.”

Well, it’s good to see that all is well between Ben and Divya, and that they have had a word with each other. No doubt, the ones who followed Divya and Priyank and loved them as a couple would be disheartened. Nonetheless, sometimes things work in a relationship and sometimes they don’t, and that’s fair enough! For further updates on this matter and many other celeb world gossip, stay tuned to BollywoodShaadis page!

NEXT READ: Rocky Reveals The Reason Why He Proposed Hina Khan On Bigg Boss Season 11