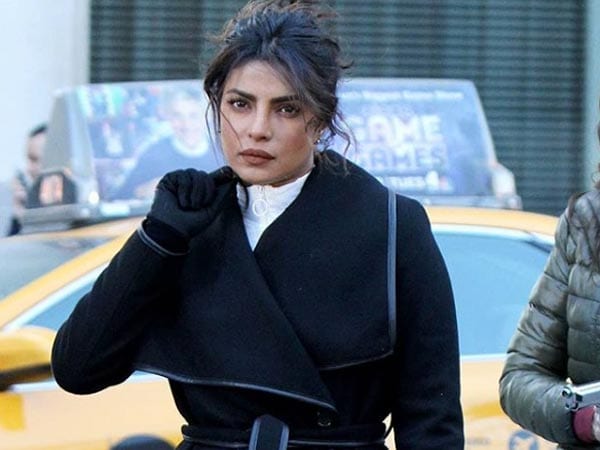 Priyanka Chopra is back in New York City and has begun shooting for her television series Quantico in the chilly winters. The stunning PeeCee is seen wearing a black trench coat, thigh length boots and gloves to keep her warm from the extreme cold conditions.

The first leg of Quantico was shot in the sunny Italy and the second leg is now being shot in the chilly NYC. Check out the pictures below…

The shoot is held in New York City and it’s cold as hell and filled with ice and snow.

Priyanka Chopra is wearing a trench coat, thigh high boots and gloves to keep herself warm in the chilly conditions.

She also posed with Indian fans during the shoot of Quantico in New York City.

PeeCee is truly having one helluva time shooting for Quantico in NYC, folks!

Due to the extreme cold conditions, she covered her ears as well.

The first leg of Quantico was shot in Italy and the second leg is being shot in NYC.

Be it extreme cold or hot, Priyanka Chopra will always be present for shoots no matter what the conditions are. Ruslaan Mumtaz left the girls swooning all over him with …

One of the most prolonged controversies of B-Town came to … As Hrithik Roshan turns a year older, fans of the …

It doesn’t happen every day when you get to see …

Deepika Padukone and Ranveer Singh tied the knot on November …