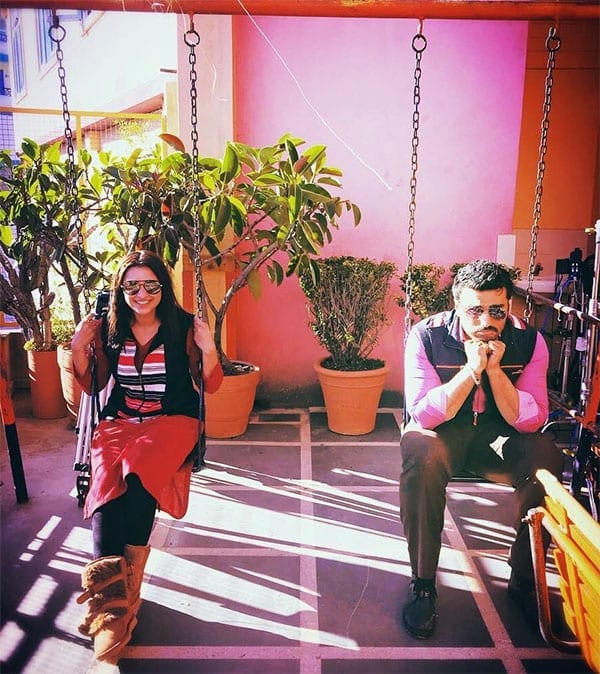 After a big gap, Parineeti Chopra and Arjun Kapoor are shooting a film together called Sandeep Aur Pink Faraar. It is produced by Yash Raj Films and is directed by Dibakar Banerjee. Interestingly, now that they have gotten back together for films, they already have one more movie to work on post this. They will be seen in Namaste Canada as well. Recently, Parineeti posted a picture of herself with Arjun Kapoor defining two moods. While the actress is all smiles, Arjun has a frown on his face. We wonder what caused that…

Parineeti captioned the picture as Smiley and Grumpy and we can’t stop laughing. She writes, “Smiley aur grumpy faraar @arjunk26 @SAPFTheFilm #SandeepAurPinkyFaraar” The film release on December 7, 2018 and will be pretty cool we feel. A few days back, the makers revealed Arjun’s look as a cop and Parineeti’s as a corporate geek girl. Both looked pretty awesome! Post Ishaqzaade, we were waiting for these two to come together. But while Parineeti wasn’t doing too many films, Arjun was busy not repeating his heroines. When it was announced that they would soon come together for not one but two films, we were really happy! Hence, every update on them is really awaited.

A source had revealed to DNA, “Arjun and Parineeti have a great bond. They were loved in Ishaqzaade in which they had sparkling chemistry. In Dibakar’s film, they stumble upon each other and their journey starts off on a very unusual note. Dibakar wanted to keep Arjun and Parineeti away from each other till they meet on the sets for the first time. The film narrates the story of a man and a woman who represent two completely different faces of India. They are united in one thing only — their mistrust, suspicion, and hate for each other.” Good luck with that! With the inclusion of megastar Salman Khan, the ensemble cast … Bollywood has given so many wonderful and famous couples who …