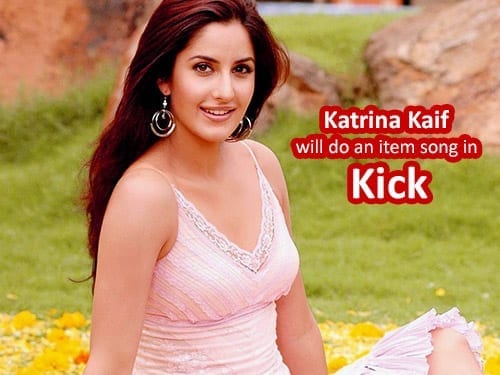 As per the latest news it is confirmed that after Deepika Padukone refused to do an item song in Salman Khan‘s upcoming film, it was Katrina Kaif who has agreed to do it. Film’s producer Sajid Nadiadwala approached Katrina as he wanted a leading face for this special item song.

This way after a long gap Salman Khan and Katrina Kaif will be seen paired onscreen. ‘Ek Tha Tiger’ was the last film they had done together and it was a blockbuster. However they didn’t sign any film together as a couple. Deepika Padukone had denied to do this item song as she is currently involved in shooting of Farah Khans film Happy New Year.

She intentionally has refused to do this item number as she didn’t want to fall in the clash of interests between Salman and Shahrukh who are considered to be arch rivals in industry. Salman and Katrina had been involved in a long term relationship but later the duo broke up. It was understood that they still maintained cordial relationship post parting their ways.

An official announcement is yet to be done about Katrina’s name as Salman has not yet approved her being a part of the film. The song will be the highlight of the film and will be used in promotional activities. It will be a special attraction of the film. Apart from Salman Khan, ‘Kick’ stars Jacqueline Fernandez, Nawazuddin Siddiqui, Mithun Chakravarty and Randeep Hooda in the pivotal role.

It will be interesting to see what new magic Salman and Katrina’s will create to lure the audience this time! With the only single release next year, actor Hrithik Roshan …