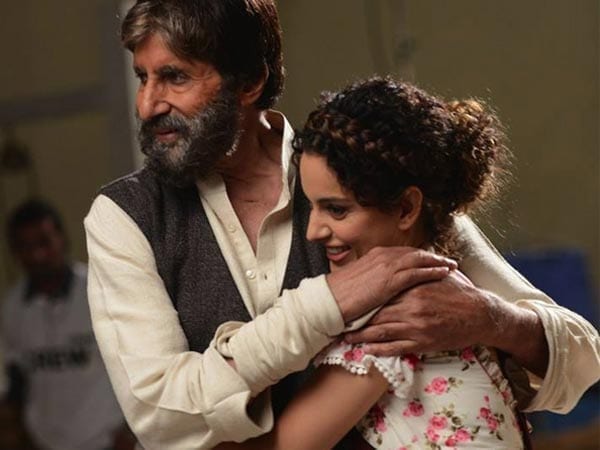 The latest buzz around tinsel town is that Kangana Ranaut will play the role of a differently-abled woman and star alongside Amitabh Bachchan in the upcoming movie, which is helmed by R Balki. A source close to the development opened up to Mid-Day by saying,

“Kangana had already been roped in for the Arunima Sinha biopic (first Indian amputee to scale Mt Everest). But the film showed no signs of kick-starting. So when Balki offered her this project, she was keen to come on board. The film revolves around a woman who is left handicapped after a freak accident, and eventually reclaims her life. Bachchan will be seen as her mentor, who will inspire her to rise against all odds.”

“Kangana will require a two-month-long prep to adapt to the body language of a differently-abled person. The actors are expected to sign the contracts next week and an official announcement will be made later this month,” summed up the source.

R Balki is currently gearing up for the release of Padman and the Amitabh-Kangana movie will soon go on floors in a few months. Also, Big B had previously praised Kangana by saying, “I am a big admirer of Kangana Ranaut. She is a wonderful actor.”

As sad as it might sound, Shraddha Kapoor is down …

The gorgeous Sunny Leone is holidaying in Mexico along with …

Ever since Alia Bhatt has started dating Ranbir Kapoor, rumours …

It looks like the Miss World 2017 Manushi Chillar is …

After a long time, Katrina Kaif is enjoying the success …

Sidharth Malhotra and Parineeti Chopra kicked off their upcoming film, … The who’s who of Bollywood showered wishes and love for …

Finally the much awaited first episode of ‘Koffee With Karan …