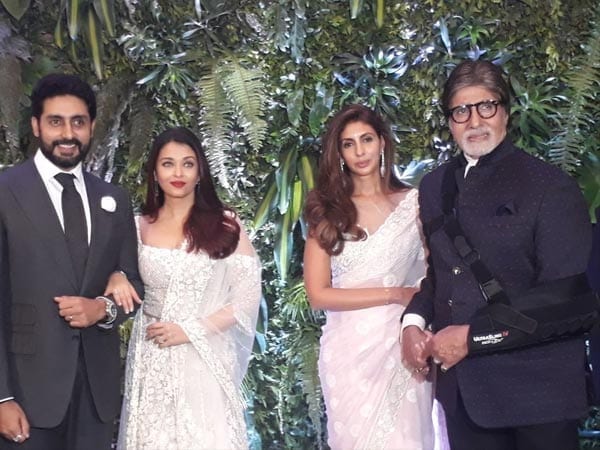 But you will be surprised to know that something strange happened when Aishwarya Rai Bachchan and Shweta Bachchan came-face-to-face at the function.

A video is going viral on the Internet, which proves that things are not fine between Aishwarya and Shweta Bachchan. As per Pinvilla, in the video the Bachchan family is seen walking the red carpet as the paparazzi were busy clicking them.

The video starts off with Big B and Shweta posing and Abhishek and Aishwarya moving towards them.

When The Shutterbugs Told Them To Pose Together

When the paparazzi ask them to pose together, while Abhishek and Aishwarya go ahead to pose with them, Shweta and Big B try to flee from the scene but are awkwardly pulled back.

Shweta & Aishwarya Were So Uncomfortable Together

Shweta then goes on to interact with her brother while Aishwarya’s smile at her goes unnoticed.

It Was So Awkward That…

It became all the more awkward as it was supposed to be a four-people photo but it definitely did not look that way as evidenced by the space between the two Bachchan ladies.

Those Who Have Came In Late

The Baaddhah of Bollywood, Shahrukh Khan celebrates his 53rd birthday …

Help from all over the nation is pouring in for …

The countdown has already begun for Priyanka Chopra- Nick Jonas’ …

A few days ago, there were reports floating in that …

The weekend is finally here and people are having lots …

Members of the Valmiki community in Rajasthan tore and burnt …