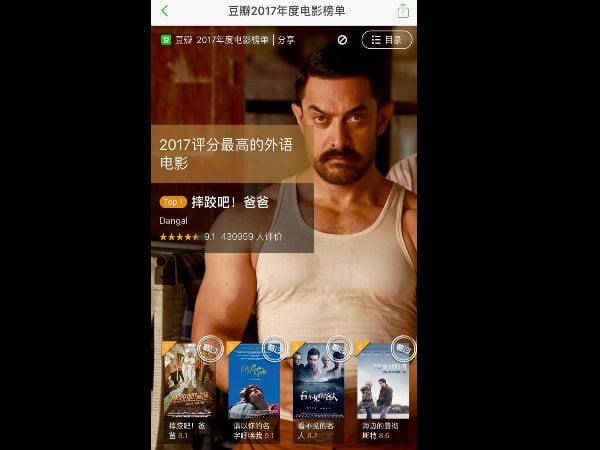 After a record-breaking run in India, Dangal continues to top charts in China too. Superstar Aamir Khan’s blockbuster hit film ‘Dangal’ has been ranked number one in an annual survey conducted by Chinese IMDB.

Dangal is the first film to witness overseas collections being at par with domestic markets. The film has been one of the most successful and Biggest Bollywood blockbuster film in China.

Dangal has a received a strong positive word of mouth in China and is one of the most watched films in China. The film was loved by the Chinese audience and had created a rage in China as soon as the film released.

The film had done a mind-blowing business at the Chinese box office and had created a trailblazing record for other films releasing in the country.

Dangal did not only witness an exceptional theatrical run in India and China but also did amazingly well in United States, Canada, the United Kingdom, Australia, the United Arab Emirates, Taiwan and other countries.

The Chinese market has not opened for any other actor the way it has for Aamir. For them, Indian movies mean Aamir Khan.

Post seeing Dangal’s phenomenal reactions in China, a surprised and humbled Aamir Khan had said, “I always believe that language is not a barrier when it comes to creative endeavours and its success in China has proved that.”

Salman Khan’s Dabangg franchise is loved by fans and people …

Priyanka Chopra and Nick Jonas will be hosting an engagement …

The release date of the Baaghi 2 starring Tiger Shroff …

Shahrukh Khan and Gauri tied the knot on October 25, …

Kareena Kapoor Khan and Saif Ali Khan are having a …