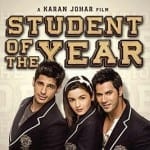 Dubai is known for its strict rules and stringent laws. Being an Islamic state it has some very stern rules for the social behavior and conduct in public. The night clubs are no exception and teenagers are strictly not allowed to enter any club without providing a solid proof of their age.

This time though one of the night club happened to have molded its rules for Mahesh Bhatt‘s daughter Alia Bhatt and let her in despite herself being below 20 years old. The incident happened when Alia was in Dubai for the promotional event of her upcoming film- ‘Student of the year’ which is directed by Karan Johar. Her co-stars Siddharth Malhotra and Varun Dhawan were with her. The promotional event was organized at a discotheque named The Vegas Club where the organizers had arranged a meet and greet with some people and well-wishers. However, according to the law of Dubai no individual under the age of 21 can enter a bar or discotheque.

Cute newbie actress Alia Bhatt is seen in different moods at the party of launch of Student of the Year. This is Karan Johar’s upcoming movie this year.

This is a first event for Alia to enter a discotheque while on abroad tour. In the past such incident occurred only once when Justin Bieber was in Dubai for her performance. She was also allowed to enter the club on the same ground.

Sources say that ultimately it turned out to be a good event and it will definitely add to the advantage of ‘Student of the Year’. We wish Karan Johar and team all the best for the box office! Akshay Kumar is one of those who get up and …