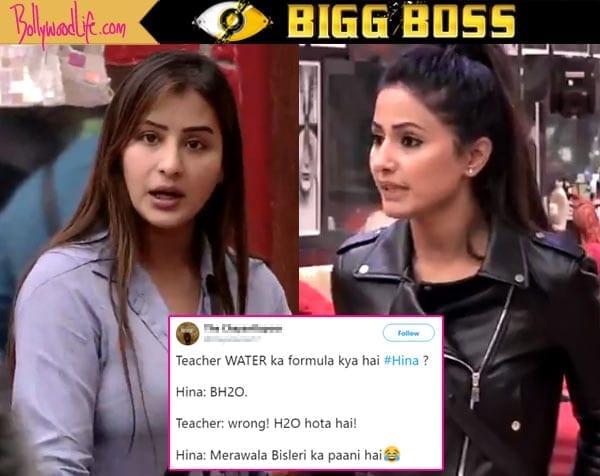 Like we told you before, Hina Khan and Shilpa Shinde had a row about using tap water for cooking instead of RO water in the Bigg Boss 11 house recently. Hina claimed that it was Shilpa’s cooking methods because of which she had an upset stomach. Shilpa was a tad bit taken aback when Hina forbade her from using the tap water for cooking. Though Hina mentioned that she is very thankful to Shilpa for cooking the meals for them, Shilpa decided to hand over the kitchen duties to Hina and Arshi Khan. Hina also agrees to taking over the kitchen duties if Shilpa can’t do it.

Twitter is having a field day trolling Hina for this. It’s a common practice in a lot of households to use tap water for cooking. It becomes pretty much usable once you boil it. But fans are going crazy and making memes over Hina’s obsession with RO water. Some of them are even comparing RO to her boyfriend, Rocky Jaiswal since she calls him Ro. Some of the tweets and reactions to this fight are damn funny. There is also a section of audience on Twitter which is offended by Hina’s behaviour and they find it demeaning. (ALSO READ: Bigg Boss 11: Hina Khan blasts Shilpa Shinde for using tap water while cooking – watch video)

Check out some of these tweets right here.

Does @eyehinakhan ka doodhwala give his cows RO water to drink? Or rather hina ka doodhwala mix RO water in doodh that he delivers to her house?#BiggBoss11 #bb11 @BiggBoss

How #Hina does the same:

Oh this just keeps getting funnier! In fact, after Hina’s rant, Shilpa decides to give up on the kitchen duties and hand it over to her. The irony is that Arshi Khan, who complained to Hina in the first place, has also been using tap watre while cooking for a long time. Fans have been quick to point that out, too. What are your thoughts on this? Tell us in the comments below and stay tuned with us for more. The Ministry of Information and Broadcasting has restricted the time … Jackky Bhagnani makes falooda and it’s the sweetest treat this …