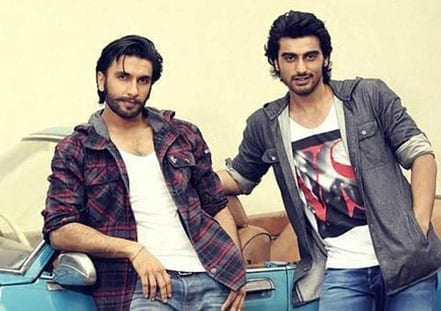 Bollywood has seen so many debutant actors who have left their mark in their very first movie. Ranveer Singh and Arjun Kapoor are the two of such talented actors who are at the top in the initial stages of their careers. While Ranveer Singh holds a unique distinction of being one of those few leading men who have been solo heroes in each of their first three outings – Band Baaja Baaraat, Ladies v/s Ricky Bahl and Ram Leela, Arjun Kapoor enjoys almost the same success with his stunning performances in his first two movies- Ishaqzaade and Aurangzeb.

Both the actors share a common distinction of having been discovered by Yash Raj Productions. When these two hottest studs in industry came together in their upcoming flick Gunday, the gossip of their so called rivalry caught fire.

“Competition is bound to happen. Both are new to the B-Town, have showed immense promise, have even delivered hits and have an almost equal slate of upcoming films with prestigious banners. The only difference is that while Ranveer is an outsider, Arjun belongs to the inside world of the film industry. With the two coming together in Gunday alongside Priyanka Chopra as the centre of attraction, tongues are bound to wag around their rivalry,” an insider from film industry says.

However Arjun Kapoor has dismissed the rumors of the possible competition. Ranveer also denied if there is any kind of rivalry between the two actors.

“I never had anything like this in my head,” says Ranveer, “Arjun and I know each other before we became actors. Now after working on Gunday, we know each other even better. The way our pairing translates on screen would make for a cracking entertainment.“ Shraddha Kapoor and Rajkummar Rao teaming up to give you …

Now that a number of biopics are being made, after …