Home
Bollywood News
Anushka Sharma and Virat Kohli wedding: The net worth of the power couple is more than a staggering Rs 600 crore! 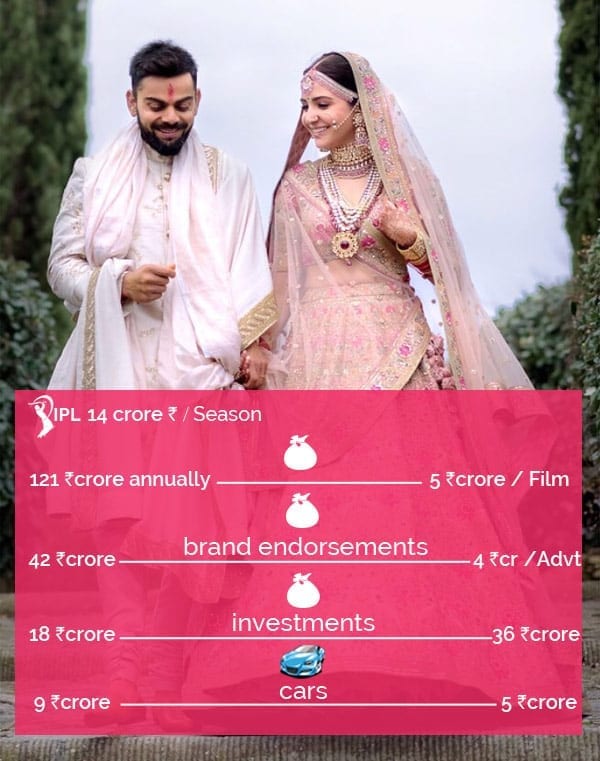 Power couple Virat Kohli and Anushka Sharma recently tied the knot at a grand wedding in Tuscany. The newlywed couple’s wedding pictures went viral in no time and soon became the top trend on every possible social media platform. The lavish wedding was certainly worth all the attention. After all it marked the union of two of the most successful individuals. The net worth of Virat Kohli and Anushka Sharma comes to the staggering Rs 600 crore.

Talking about Virat Kohli, who is the skipper of the Indian cricket team in all formats, has hit a purple patch and is scoring runs by the tons. As per reports, Virat earns Rs 121 crore annually. He also gets Rs 14 crore for a two-month season of the Indian Premiere League. Coming to brand endorsements, the cricketer mints Rs 42 crore while his investments total up to Rs 18 crore. Virat has six luxury cars which are worth Rs 9 crore. The total net worth of this modern day legend comes to the whopping total of Rs 390 crore. (Also Read: Anushka Sharma and Virat Kohli left for Rome for their honeymoon)

On the other hand, Anushka Sharma, who had started her Bollywood career with the blockbuster Rab Ne Bana Di Jodi is one of the leading actresses today. The actress even has her own production house, Clean Slate Films, along with brother, Karnesh Sharma. As per reliable sources, Anushka charges Rs 5 crore per film and Rs 4 crore per ad. The personal investments of the actress is worth Rs 36 crore, while her four luxury cars cost Rs 5 crore. The net worth of Anushka stands at the grand total of Rs 220 crore.

If you add their net worth, the couple is easily worth Rs 610 crore. Phew, while we are happy with how good they looked together, we are sure that their bankers must be on cloud nine with the kind of brand power of Virushka. All the punjabi movie lovers pay some attention guys cause … If you are a diehard fan of actor Sushant Singh …