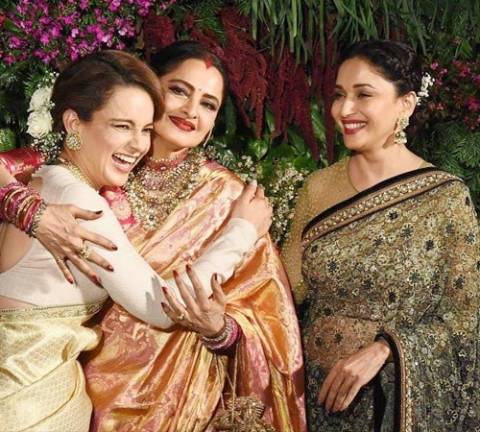 Though Virat Kohli and Anushka Sharma had a dreamy close-knitted marriage ceremony, the ‘made for each other’ couple hosted a reception yesterday (26 December) at Mumbai’s St. Regis. Last night saw a galore of celebrities walking the carpet to wish the newlywed couple. The high rated venue was buzzing when big names from film fraternity and cricketers walked in their best styled looks. While everyone was in awe of the couple, TellyChakkar observed the reception from another angle.

During the course of the whole reception, there were certain moments that left us awestruck. TellyChakkar lists down 5 such WOW moments that transpired in the regal reception.

It has rarely happened that three iconic actresses from three different era come together on one platform. Viruhska’s Mumbai reception, made this rare dream a reality. The reception saw the beautiful Rekha, Madhuri Dixit and Kangana Ranaut colliding together on the carpet. The three elegant actresses not just greeted each other but also posed for a striking picture. Our hearts beated faster while watching such gorgeous ladies draped in marvelous sarees.

The above mentioned film saw Ranbir Kapoor and Anushka as a pair, wherein his character was in love with her. Cut to real life, when Kapoor landed in the reception, it gave us a major déjà vu of the film. It actually felt like we are reliving the movie, wherein Ranbir’s character ends up going to Anushka’s character’s wedding. Furthermore, the trio also posed for a picture which just made our day! Have a look at this ultimate ‘friendzoned’ picture.

Well, we don’t really need to say much about this moment. It was such a special moment when the regal Bacchans entered the reception. Their charm was inevitable. However what made it more memorable was when News Arjun and Aalisha show their fun side; recreate a … News I was a zombie: Parineeti’s depression admittance goes viral … News Netizens criticise Deepika Padukone for THIS look as she … News Shivani Surve back on television, Rohit and Anita go …